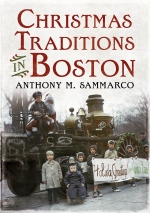 Rescheduled for Monday 12/23 at 7pm due to tonight's weather forecast.

Join us on the evening of December 2 as we officially kick off the holiday season with a visit from author Mr. Anthony Sammarco.  He will be discussing his book Christmas Traditions in Boston:

In 1659, the General Court of Massachusetts Bay Colony banned by law the celebration of Christmas as it was deemed to be a time of seasonal excess with no Biblical authority. Though repealed in 1681, it would not be until 1856 that Christmas Day became a state holiday in Massachusetts. In this book Christmas Traditions in Boston, Anthony Sammarco outlines the celebration (or lack thereof) of Christmas in the first two centuries after the city was settled in 1630. By the mid 19th century a German immigrant named Charles Follen introduced the Christmas tree to Boston, and shortly thereafter Louis Prang introduced his colorful Christmas cards, the first in Boston. During the next century, Boston would see caroling and hand bell ringing on Beacon Hill, a Nativity scene and other traditional New England displays on Boston Common and in the many department stores, as well as the once popular Enchanted Village of Saint Nicholas at Jordan Marsh, New England's largest store. What could have been better than after a day seeing Santa, the seasonal displays and lights on Boston Common than to enjoy a hot fudge sundae at Bailey's? Christmas Traditions in Boston revisits the memories of the past and brings together the shared tradition of how Bostonians celebrated the holiday season.

The Garden Club of Norfolk will be providing light refreshments for this event.