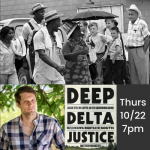 Join us virtually as author Matthew Van Meter talks about his debut nonfiction book: Deep Delta Justice: A Black Teen, His Lawyer, and Their Groundbreaking Battle for Civil Rights in the South.

In 1966, a 19-year-old black man named Gary Duncan pulled his car over in a small town in Louisiana to stop a fight between four white kids and his two cousins. After he put his hand on the arm of one of the white children, Duncan was arrested for battery. His legal journey would take him all the way to the Supreme Court. In this powerful work of character-driven history, Van Meter brings alive how one court case changed the course of justice in the South and the entire country.

Matthew Van Meter works with people whose voices have been ignored or silenced, both as a journalist and as the Assistant Director of Shakespeare in Prison. His reporting on criminal justice has appeared in The Atlantic and The New Republic, and he is currently editing the first critical edition of Shakespeare written entirely by incarcerated people. Raised Quaker on the East Coast, he now lives in Detroit.

Registration is required for this program.  Login information will be emailed the day before to those that sign up.

Registration for this event has now closed.